All of the homes within Ken-Caryl are within the Wildland Urban Interface (WUI), an area of increasing risk for wildfire. Multiple factors interact to determine the behavior of wildland fires. Fire behavior refers to the intensity at which a fire burns, the rate of spread and how it moves. General descriptions of wildfire behavior focus on where the fire occurs in the vegetation: underground, on the surface and in tree crowns.

Ground fires are fires that burn below the surface. With the rocky soils of Ken-Caryl ground fires are not common. During surface fires, fuels at or near ground level, such as grass, shrubs and/or fallen leaves and branches, carry the fire. Crown fires burn through the tops of trees. In general, the relative intensity (amount of heat released) of the different types of wildfire increases from ground to surface to crown fires. Firebrands, burning embers which may be carried for a mile or more, may originate from surface fires or crown fires. Structural fires, or burning homes or buildings, are another type of fire that can produce firebrands.

Fuels: The primary fuels in wildland fires are living and dead vegetation. During extended periods of warm and dry conditions, all plants will burn if exposed to enough heat. However, plants differ in how readily they ignite and how hot or long they burn. Flammability depends on arrangements of decks and landscaping, plant size, arrangement of branches and leaves, and the chemical properties of branches and bark. The gambel oak brush common to the Front Range of Colorado and the Western United States burns hot and fast, even when green. 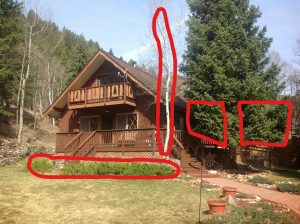 This house could be in much better condition if the fuel circled in red were removed.

Weather: Precipitation, humidity, wind and temperature are important weather variables that influence fire behavior. Precipitation and humidity, which are influenced by air temperature, directly influence the flammability of all fuels by affecting the moisture content of living and dead leaves, branches and grasses. Plant materials dry out quicker and ignite easier during hot, dry weather. Windy conditions as are seen during Red Flag Warnings on hot, dry and windy days, increase the rate of spread of fires and may increase fire intensity.

Slope orientation also influences fire behavior. Forests on southern or southwestern slopes generally have lower humidity and higher temperatures than those on north or northeast slopes because of the path of the sun. Look to the foothills west of Ken-Caryl Valley and notice the density of fuels on the north-facing slopes. Consequently, fire hazard is often higher on south and southwest facing hills.

Of the three factors affecting fire behavior, fuels are the easiest to manage by homeowners to lower fire hazard.

Strategies to Reduce the Risk of High Intensity Fires 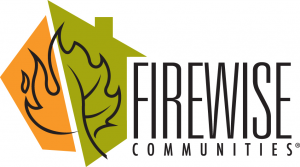 Homeowners in high fire hazard areas can reduce the risk of high intensity fires affecting their property. An important concept for homeowners living in hazardous areas is that of defensible space. Defensible space is defined as an area of modified vegetation between wildland fuels and homes that allows firefighters to protect the home or, in the absence of firefighters, allows the home to better survive on its own. The most extensive modification of vegetation should occur within an area of at least 30 feet around the house. Beyond this area, additional modification of landscaping creates a larger buffer from an approaching wildfire and further decreases the risk of damage, as well as giving your family and neighbors more time to evacuate during an approaching wind-driven wildfire.

Create and maintain a defensible space by removing the lower branches up to 10 feet from the ground on large trees, separating beds of landscape plants and removing flammable vegetation from within 30 feet from your house. Homeowners living on a steep slope or hillside should maintain a larger primary zone of defensible space on the area below the home. 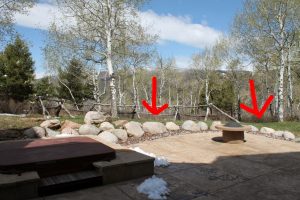 Wooden fences and uncleared brush should be removed.

Landscape your yard with Firewise plants with the following characteristics: slow growth with little accumulation of dead vegetation, high moisture content and low concentrations of oils or other flammable chemicals in the leaves and branches (e.g. succulent plants), and an open and loose branching pattern. If natural areas exist on your lot, you can reduce the intensity of an approaching fire by:

(3) reducing the continuity of ladder fuels.

Now is the Time for Mitigation

When wildfires occur near homes, homeowners often feel powerless to protect their property. An approaching fire may seem unpredictable and difficult for trained firefighters to control. However, with an understanding of the concepts of fire behavior outlined in this paper, you can anticipate the intensity and movement of a fire by considering several key conditions: fuel structure, local weather and topography. Furthermore, by altering the conditions around your house, such as decks and outdoor furniture, you can influence the movement and intensity of fires, and consequently, improve the survivability of your home.

This article was originally published in Life at Ken-Caryl on May 26th, 2021, Republished with permission.